Isn’t it great? « North America’s Greenest Spa »: this is how the blog Traveling The Green Way titled its article on Spa Eastman. Here’s an extract from this article:

« Recently, the spa won Eastern Townships’ Final of the Grands Prix du tourisme in “Sustainable Tourism” category. The spa has been a sustainable tourism forerunner because of its organic business and responsible health concept. » (by Sonya, author of TravelingTheGreenWay) 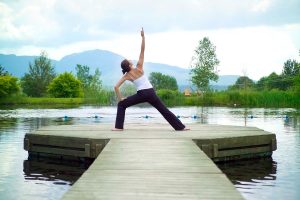 Spa Eastman received this honour because of its global plan of actions. Spa Eastman’s waste management program diverts over 23 metric tons from landfills, which represents an 81% recycling rate. The implementation of the 3RV (reduction, reinvestment, recycling & validation) is done systematically and the results are two-fold. Spa Eastman has always paid particular attention to where food products come from: most of the products used are organic and the gardens provide the kitchen with fine herbs, edible flowers, sprouts, vegetables and berries.

Last June, I had post an article here entitled « Spa Eastman: Greener than Ever » because it had just won a major Environmental Grand Prix plus two other special recognitions. That, plus this recent honour given from the Eastern Townships, makes me proud but, in the meantime… it almost makes me smile. Spa Eastman was created in 1977. Co-owner at that time, Jocelyna Dubuc (the actual President Executive Director) really had to fight with her suppliers in order to respect her motto of “offering organic food, using non-modified basic ingredients, etc.” Thirty-something years ago, she didn’t have much support when she was talking about re-using and recycling, or when she was fighting to find organic food, or trying to convince her troops to stir the compost… So it kinda makes me smile to that she’s now “awarded” for it! Of course, as Vice-President Gérard Marinovich recently said it, “the challenge of sustainable development now goes far beyond organic gardening. In the last few years, our management and operations has been closely examined. As a result, several changes have been implemented and we are especially committed to pursuing these efforts to lessen our ecological footprint”.

Traveling The Green Way ends its title with a question mark. Is Spa Eastman North America’s Greenest Spa? My answer would be: so far, so good. Honestly, as far as I can see through the web and through our contacts, no other spa has received important sustainable development and sustainable tourism Awards like Spa Eastman did. But that doesn’t mean others aren’t working hard on it too. May Spa Eastman’s success “inspire” a large number of spas and that they will all want to compete with us next year! Imagine if the entire spa industry, why not the whole North American tourism industry, would perform as Spa Eastman does to lessen their ecological footprint… Wouldn’t it be great? That is the ultimate Award I am dreaming of.